LED lamps for cars Fahren are inexpensive and high quality lamps, which have received many positive reviews from users. They have a pleasant white light, high luminous flux value of the lamp has a long service life, and are easy to install. Compared to standard halogen lamps, Fahren LEDs are 3 to 6 times brighter than conventional lamps.

There are several series of LED lamps Fahren, the main difference is the brightness and luminous flux value of the lamp (from 10 000 LM to 20 000 LM). All Fahren car lamps have cool white light (6500K) and high performance lamps. Super focused beam pattern and no dark spots or foggy light from the Fahren lamps, will not dazzle the oncoming traffic.

Fahren LED lamps to have an ultra-thin 1.2mm design, which provides an ultra-focused light beam, effectively mimics the directional pattern of original halogen lamps, and solves the problem of uneven focus. The ultra-focused and maximum light output provides a wider and farther illumination area with a 360° adjustable beam, allowing for the best light output. 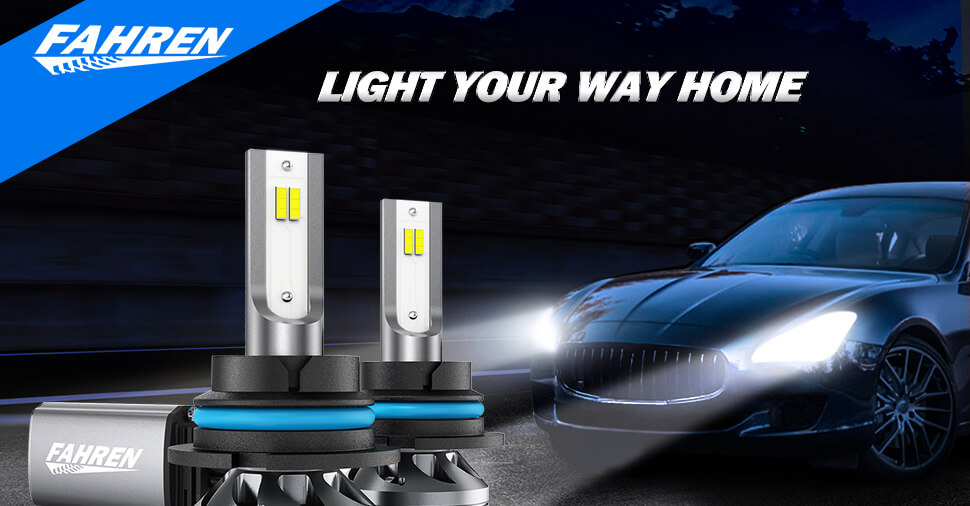 In order to get a better and brighter diode light headlamp, just unscrew the bulb that was installed before, and instead put a new LED lamp Fahren. On most vehicles, halogen bulbs are installed through an adapter or socket adapter. To install a diode lamp, you need to use a special CAN bus adapter that comes with the lamp.

Unlike incandescent bulbs, where a glowing tungsten filament radiates light, LED lamps work due to the semiconductor crystal, which emits light when supplying voltage. The peculiarity of the electron emission source is that current stability is important for its power supply, otherwise the semiconductor degrades and fails. For this reason, a good ice lamp necessarily consists of two parts – the LED (or a group of semiconductor devices) and an electronic circuit called a driver. The latter just serves to limit the current and allows you to power the emitting conductors in the optimum mode.

In the process of LED lights and they emit less energy in the infrared range, but the LEDs themselves are strongly heated. High temperature leads to the destruction of the crystal, so manufacturers use both passive and active ways to cool it.

LED bulbs are popular because of their numerous advantages:

The most popular lamp sockets:

Which LED bulbs should I choose?

For dipped beam in the headlights of most cars are responsible lamps with H11 and H7 sockets. LED assembly in them is located on the top plane, so the light flux from the
the reflector is directed downward.

When selecting an LED bulb you should consider:

High-beam LEDs with an H1 socket are powered by a current of 1.5-2 A because in this mode the headlight required light output of the highest intensity. The power of semiconductors should be at least 17-20 W, and the luminosity – more than 1500 Lm.

A sufficiently high power requires good cooling, so the H1 lamps must have an efficient, elaborate cooling system.

Universal LED headlight bulbs for car headlights are equipped with an H4 mount and combine LEDs for dipped and high beams. Because the headlamp optics are designed to match the dimensions of incandescent bulbs, choose bulbs that are as close as possible to the traditional halogen bulbs.

When selecting lighting fixtures of the combined type, you should be guided by the following indicators:

To choose the right Fahren LED bulb for your car, check out our reviews: